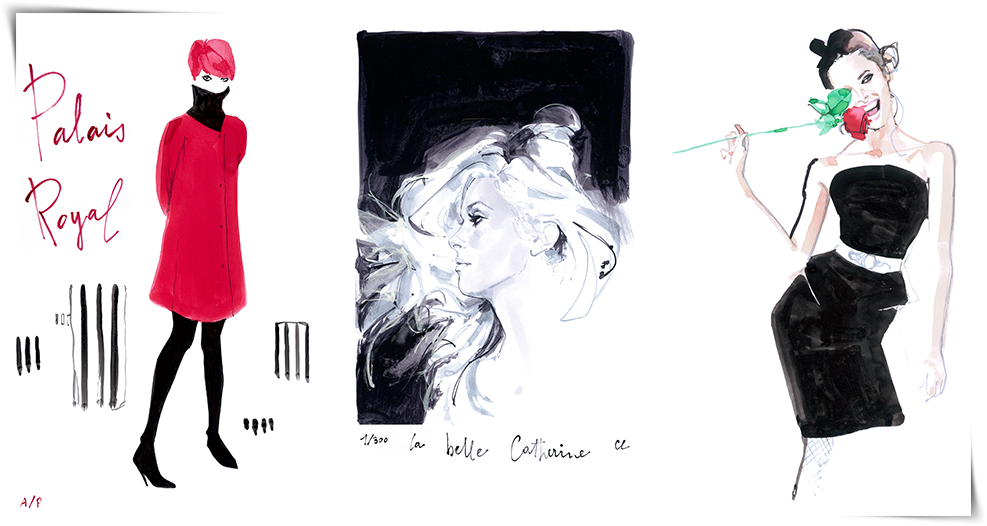 A bevy of beauties by Marc-Antoine Coulon. 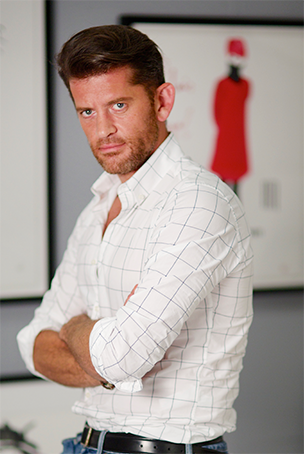 Once being "discovered" meant showing up at the right place at the right time - think Lana Turner sipping a malted in a Hollywood drugstore or Toni Braxton singing to herself at a Maryland Amoco station.

Today, such discoveries occur in cyber space. Just ask Marc-Antoine Coulon whose glamorous illustrations of iconic models and actresses were uncovered on Instagram by the fashion icon herself Ines de la Fressange.

When Vogue Paris was preparing a special issue dedicated to her, the former Chanel model suggested they hire Coulon whose drawings she'd been following on her feed to illustrate the feature. His career snowballed from there when several agents including RubyLUX dealer Dean Rhys Morgan discovered his work once again on Instagram.

Handsome and enigmatic, this 30-something Parisian has been drawing since the age of two, professionally since 1997, and today has become one of the most sought-after fashion illustrators in Europe. Coulon's chromatically dreamy portraits of beautiful men and women and his runway renderings can be found regularly in French and Spanish Vogue, British Vanity Fair, L'Officiel, Madame Figaro, French Elle, and the Carita beauty salon in Paris.

"I'm not comfortable with faceless models. I need to create something that's alive and dancing," says Coulon. "I need to hear music. I believe that's the way my Italian roots show. I want my illustrations to tell a story, but without words."

Fashion illustration was a natural choice for Coulon, who says that discovering the work of Italian illustrator Rene Gruau at the age of four rocked his world. Gruau's exaggerated portrayal of fashion design through painting has had an indelible effect on the fashion industry, hints of which can be found in Coulon's deft brushwork and sensual palette. Other legendary fashion illustrations that have marked him include Andy Warhol's early work, the magic of Antonio Lopez, the hard shapes of Constance Wibaut, and the windy portraits by Just Jaeckin.

How does Coulon approach a subject?

"I have to fall deeply in love with my subjects otherwise I won't be able to create something interesting with them," says Coulon. "I have to feel love for them, and they have to accept that love even if it only lasts the time of the drawing session. I feel lots of empathy for my models."

And naturally, he loves to draw de la Fressange.

"She could have been a character in a novel by Colette," he says. "She is the ultimate lady yet very simple and joyful. And those eyes!"

Another obsession is Catherine Deneuve whose glacial beauty Coulon has depicted repeatedly while adding a welcome accessibility to her image. When asked if Deneuve is au courant about his adoration he says: "I don't think she knows about that, as a matter of fact I find it very romantic to be secretly in love with her and she'll never know."

Dean Rhys Morgan, the London-based writer and print dealer who specializes in fine illustrations now represents Coulon. Like the others he found him on Instagram and tracked him down in Paris.

"I was immediately struck by his power and attack; he hits the paper with extraordinary confidence," says Rhys Morgan. "I felt his work would appeal to both seasoned collectors of fashion illustration and those who think it's just pretty."

Rhys Morgan believes that fashion illustration is at last achieving widespread recognition as fine art in its own right and Coulon has the potential to become one of its leading proponents.

"He captures the essence and spirit of his subjects like no other image maker before him. His work reminds one of what the hand was able to achieve before it was replaced by the eye of photography," concludes Rhys Morgan.