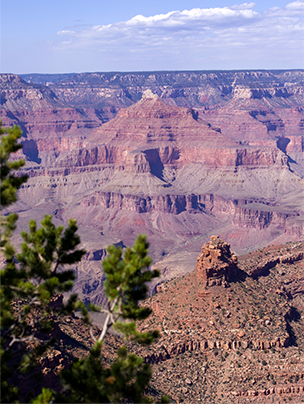 The rugged beauty of the Grand Canyon. 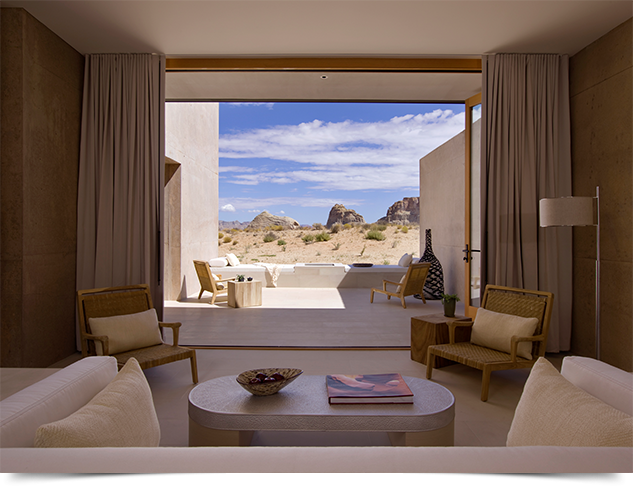 A suite at the Amangiri comes with unparalleled desert views. 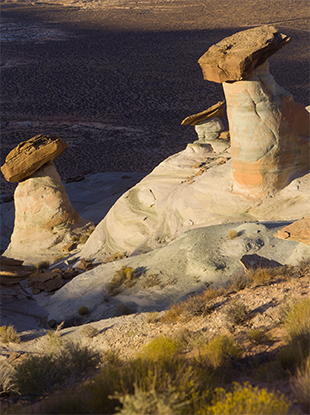 A Mesa hike is filled with magnificent and unusual desert views.

Unless noted, all photos courtesy of Aman Resorts.
by Andrew Myers
Amangiri
Escape to Magic Mountain
Be still and the earth will speak to you. Navajo Proverb

"Rejuvenation" and "revitalization"? These bywords of self and self-discovery are the re-booting Botox of escapist and experiential travel—a rapidly expanding filler that is plumping, primping and generally propping-up luxury lifestyle travel (according to articles such as "The New Flexibility of Yoga Getaways," a feature in The Wall Street Journal). But as alluring as striking a downward dog on the terrace of a Renaissance Tuscan villa might be, especially while dreaming of the Chianti to come, "re-orientation"—to change your focus or direction by figuring out your position in relation to your physical or metaphysical location—is a mightier mission. 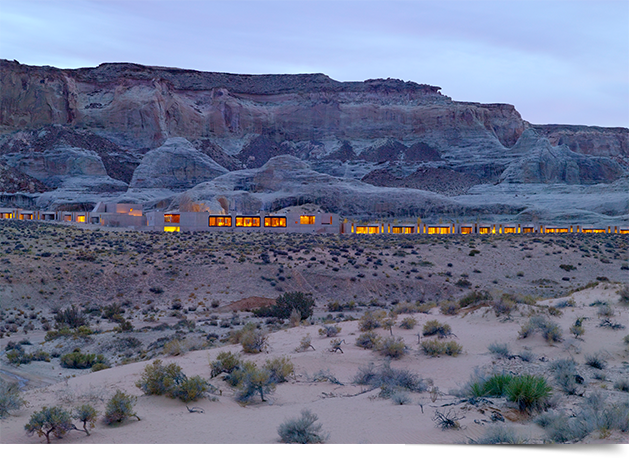 A picturesque view of the property from the sand dunes.

Its accomplishment necessitates a delicate balance. One can't be overly coddled by the familiar, but neither can one be challenged to the point of utter disorientation. "Beam me up, Scotty" otherworldliness paired with a human-made frame that enhances the setting, that's the ticket—and that ticket is to a destination called Amangiri. 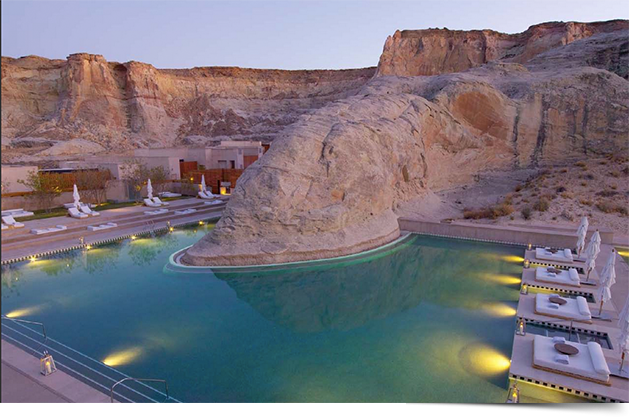 The main swimming pool, a large rectangular mass of blue water, is puntucated by a rocky escarpment, which protrudes from the base of the cliff that forms the Amangiri's backyard.

The high desert of the American southwest, the big sky Colorado Plateau that stretches across the Four Corners where Arizona, Utah, Colorado and New Mexico rub borders at Euclidean right angles, is a geological marvel 180 million years in the making. Filled with enormous geological feats of rock-y derring-do — towering pinnacles, cantilevered terraces, hoodoos (mushroom hood-like rock towers), mesas, and benches — that lend the land an extraterrestrial context unique to our third planet from the sun, it's a terrain deemed holy by the Diné (what the more commonly-termed Navajo people call themselves), one with the greatest concentration of national parks and monuments in the United States, and one that has inspired legions of artists from Georgia O'Keeffe and Maxfield Parrish to Walter De Maria and James Turrell. 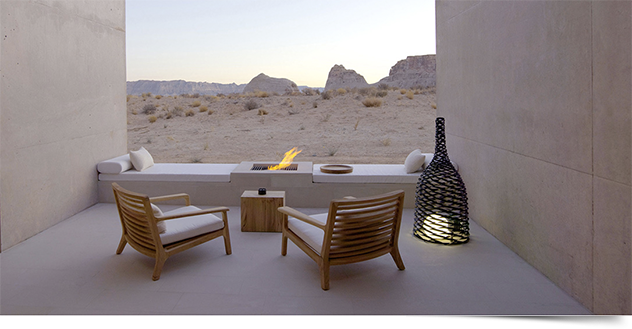 A private view of the surrounding landscape is an aesthete's paradise.

A vast, sparsely populated place filled with panoramic vistas and temperature swings, it's a land where rock and sand play canvas to the sun, and beiges and reds deepen and dance from dawn to dusk, giving way to a pitch black tabula rasa perfect for celestial displays of distant planets and shooting stars. It's also a place where scale and scope play with the perception of depth and distance, where shifting winds fill ears with silence save for the thump of a heartbeat and the hum of one's own thoughts. All of which could drive the reasonably sane over the proverbial — or in this terrain, literal — cliff. 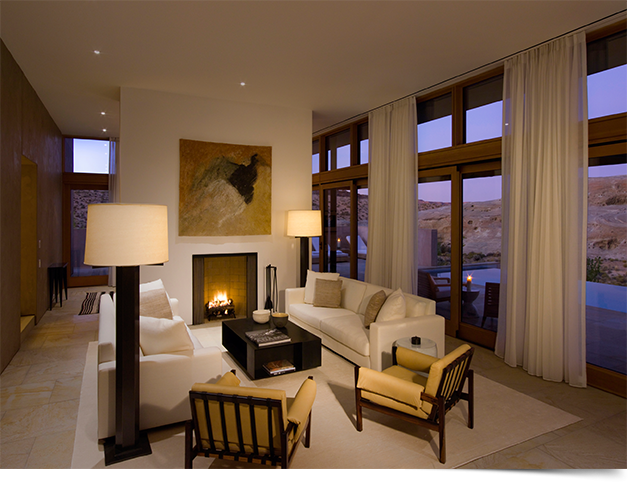 The four-bedroom Mesa home is just minutes from the resort.

Amangiri to the rescue. Set on 600 acres in Canyon Point in southern Utah, with sweeping views across seas of sand to Studhorse Mesa and the distant Grand Staircase Escalante National Monument, Amangiri, which means "peaceful mountain" in the language of the local Shoshone tribe, serves not only as a desert oasis of buttressing comfort, but also as a translator, a "desert whisperer" that enables mere mortals to meld with its environs.
How so? First and foremost by architecture and design. A collaboration between architects Marwan Al-Sayed, Wendell Burnette and Rick Joy, Amangiri is a combo of cubes, squares and rectangles that marries the Modern and neo-classical in a linear and right-angled symphony, one that simultaneously complements and contrasts the curves of the landscape at large and of the site itself. It's a juxtaposition perhaps most readily seen in the property's main swimming pool, a large and largely rectangular mass of blue water punctuated by a rocky escarpment shaped like a ship's bow that protrudes from the base of the cliff that forms the Amangiri's backyard. 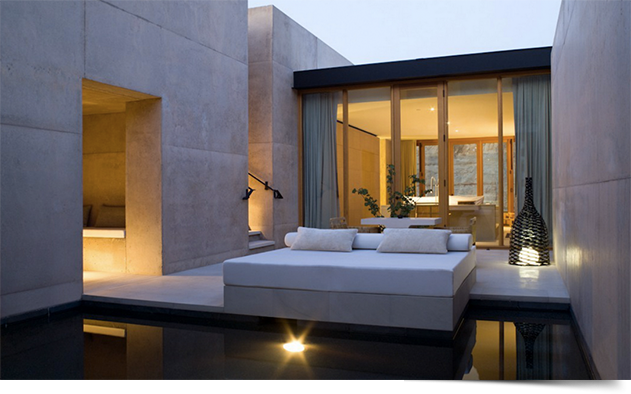 To sleep under the stars perchance to dream.

A single, central, rectangular pavilion houses the principal indoor public areas for dining, drinking, reading, and lounging—perches that are for the most part in an open, airy plan, and with views and light on both long sides. And from this pavilion flow the two guest wings, Mesa and Desert respectively, the former containing 16 suites, the latter 18 suites as well as the 25,000-square-foot two-story spa. Borders between indoors and outdoors diminish courtesy of floor-to-ceiling windows and doors, many of which can be opened or fully retract; and marvelously monontonic interiors that mirror a desert palette—blonde woods, raffia, bleached leather, beige concrete and light stone alongside an occasional accent, such as succulent green. Likewise, borders demarcating the property from the surrounding landscape dissolve thanks to the subtle tints of pink, ocher and light plum—hues found in the adjacent cliffs. 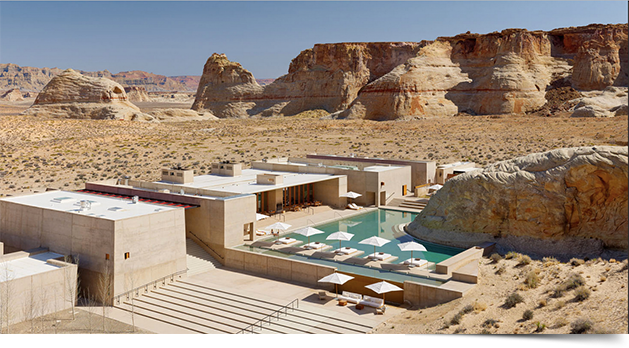 Amangiri is located in the dramatic landscape of Canyon Point, Utah in the region known as the Four Corners where the states of Utah, Colorado, New Mexico and Arizona meet. Photo: idesignarch.com 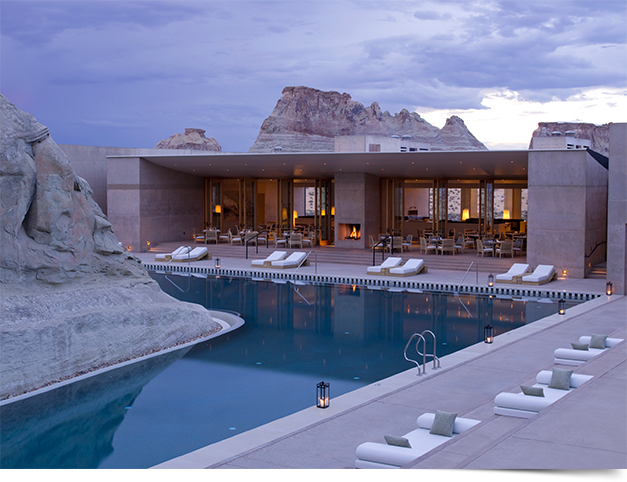 The pavilion and swimming pool at dusk.

But for me it's the outdoor spaces—the roof decks, lounging terraces, public and private, seating areas, open-air living room, and reflecting pools, and, in the spa, "floating" terraces that prove most transportive, transcendental even. Situated on or along an axis, they feel safe, predictable, comforting, classically lovely, and all offer framed, a.k.a. protected, views of the elemental and wild. In short, they offer physical and psychological protection...but not too much. And in that sense, the architecture itself serves as mediator for the meditative. 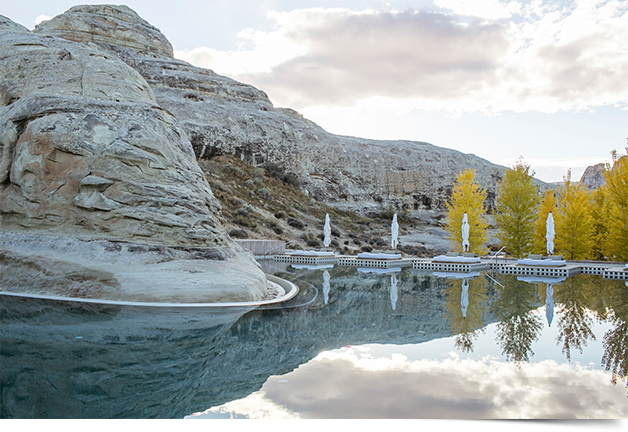 The Amangiri is located at the heart of the Grand Circle.

Of course, the fact the resort is part of the Aman family means the service, amenities and menus—both dining and activities, such as horseback and balloon rides, and Navajo-based spa treatments—are as generally superlative as they are influenced by the specifics of the region (Amangiri, which opened in late 2009, was the second Aman in the United States).
And thus comes, or might come, re-orientation. Or, to quote another Navajo proverb: The mountains, I become a part of it...The morning mists, the clouds, the gathering waters, I become a part of it. 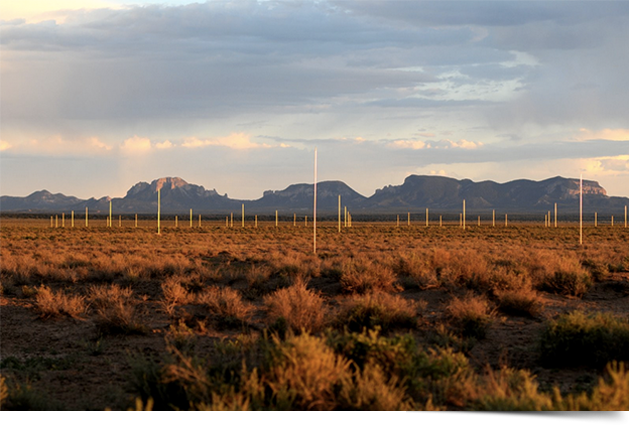 Artists such as Walter De Maria have been inspired by the color and terrain of the Colorado Plateau. Pictured here is De Maria's Lightening Field.