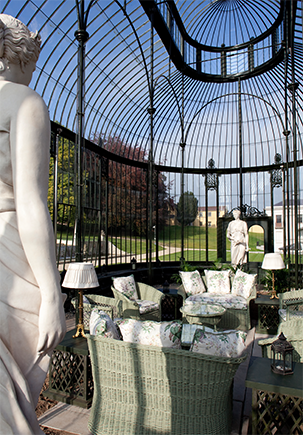 God is in the details: The conservatory is hidden behind the bookcase in the mansion's library. 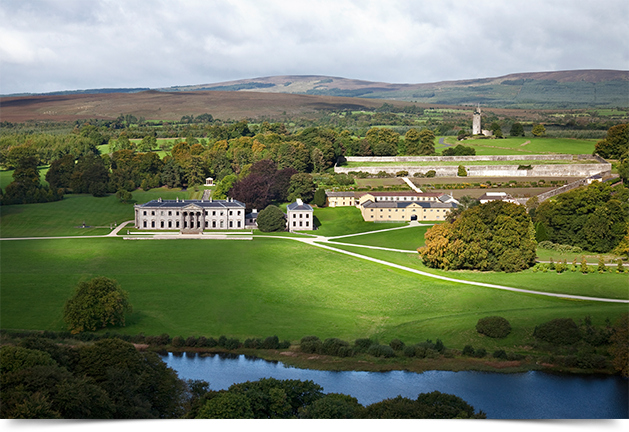 An aerial view of Ballyfin, the Irish country house turned hotel at the foot of the Slieve Bloom Mountains. 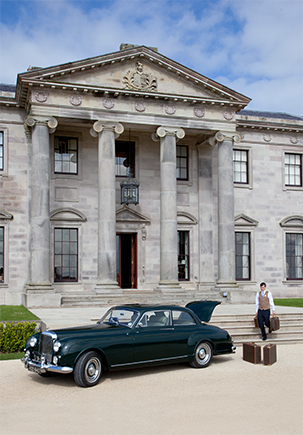 Entrance to the early 19th-century, neo-classically designed Ballyfin.
by Andrew Myers
Ballyhoo for Ballyfin
"Yesterday I saw the most delightful place indeed...Ballyfin." A letter from Emily, Countess of Kildare, to her husband, 1759.

Screw playacting Downton Abbey and flouncing about Jane Austin-like in un-renovated Georgian houses where the loo is down that long hall riddled with creaky floorboards and critters creepy. About an hour by car, sixty miles southwest of Dublin in the rolling hills of County Laois, Ballyfin is its own magical kingdom for grown-ups and other lovers of passementrie interested in aesthetics, the fine and decorative arts, history, horticulture, outdoor sport, and utter escape in order to re-boot and achieve ... Otium.

A walled 614-acre estate with an 18th-century park surrounding the most magnificent early 19th-century neo-classical house in Ireland, Ballyfin is the pile and passion of American billionaire Fred Krehbielf and his Irish-born wife, Kay, who rescued the manor, quadrangle of outbuildings, gardens, follies and man-made lake in 2001 via a ten-year no-expense-spared renovation. In so doing, they reconceived the house and grounds as a complete and immersive aesthetic experience, a transcendental hotel where centuries merge at the apogee of their magnificence, modern comfort alongside 18th and 19th century luxury.

No easy trick, that. But the estate had good bones. Make that a sublime skeleton. The demesne, or the land attached to a manor and retained for the owner's personal, non-income-producing pleasure, was laid out in the 18th century, likely the first romantically idealized "naturalistic" landscapes in Ireland along the lines of the great English designer Lancelot "Capability" Brown; included a 28-acre manmade lake and grotto; and was enclosed by a serpentine stone wall that, although decaying, still encircled the entire estate. 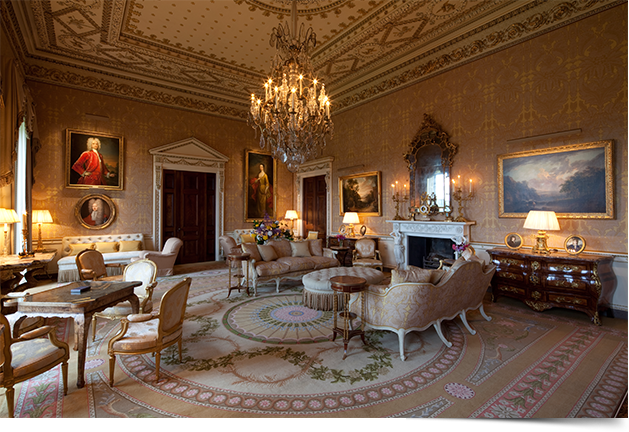 The Regency mansion boasts twenty rooms on the 614 acre estate.

Then there was the house. The power statement of the day, its purpose was to proclaim, in Clonaslee sandstone, the wealth and might of its owner, Sir Charles Henry Coote, Ireland's premier baronet. To do so Coote employed the starchitects of their day, the father-son team of Richard and William Vitruvius Morrison. He also expansively exercised the family motto in full: Coûte que Coûte, or "cost what it may" (this is also a play on the family name, Coote, no doubt a yuckfest in the day). Up went the façade of 13 bays interrupted by the central pedimented portico supported by columns with Ionic capitals inspired by the Temple of the Illissus in Athens. In went the antique Roman mosaic floor in the entryway, purchased by Sir Charles on his Grand Tour; ceilings that represent the zenith of Irish decorative plasterwork &mdash; bold, three-dimensional fantasies of flora, fauna and celestial forms; parquetry without parallel, referencing Empire, Moorish and classical forms, including the floor in the rotunda based on the Lion Court of the Alhambra. 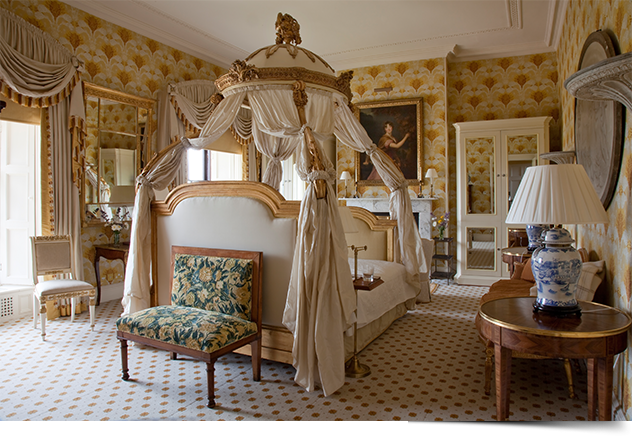 A study in elegance: a French inspired bedroom filed with furnishings from the Neoclassical and Empire periods.

The salad days for the Cootes at Ballyfin lasted but a hundred years. Like much of the Anglo-Irish aristocracy, bowing to new economic and political realities following the First World War and the Irish War of Independence, the 13th Baronet thought it best to sell up in 1927 and relocate to London. So began Ballyfin's next chapter, as a secondary school operated by the Patrician Brothers, a Catholic teaching order. While the Bros proved vigilant stewards, thankfully altering the house and grounds very little, their means were not princely or papal. And so also began a decline that by Krehbiel's arrival in 2001 was to the point of physical collapse.

The restoration involved a dream-team of artisans, advisers and professionals from Ireland and England, and was so extensive the Krehbiels commissioned a beautifully illustrated book of several hundred pages. Nuf said. 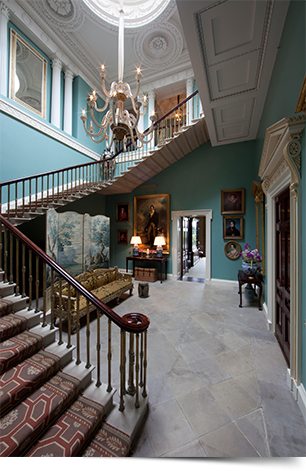 The mansion walls are filled with Irish art from the mid-17th century to today.

As for the result? Suffice it to say that the eighty-foot-long library punctuated by black scagliola columns is once again carpeted with 19th century woven originals, lined with leather-bound books, and filled by a Victorian-Edwardian vibe. The Gold Drawing Room is restored resolutely in the Empire-style, its color scheme culled from the 24-hues in the Savonnerie on the parquet floor, with the light from the crystal chandelier that once graced the Paris hôtel particulier of Queen Caroline of Naples (Napoleon's sister) playing off the gold silk and linen damask lining the walls. The glass panes in the conservatory &mdash; an 1855 Victorian addition &mdash; have been repaired, re-glazed and reassembled, providing an ideal location for a preprandial coupe.  And twenty unique bedrooms, each a combination of art and comfort (for example The Trellis bedroom, with wall paintings of garden scenes commissioned from Lucinda Oakes) lie ready to cosset and comfort while fostering artful dreams. The entirety, as well as new additions such as a spa and indoor swimming pool, was designed by Colin Orchard, formerly of Colefax and Fowler, who views this project as the high water mark of his career.

Ballyfin is beautiful by any measure. Yes, the staff to guest ratio mirrors the Edwardian era of Downton Abbey. Yes, tranquility and comfort are ensured by access to the property granted exclusively to guests (trashy fun fact: Kim Kardashian and Kanye West honeymooned here, likely due in part to the property's privacy). And yes, the antiques and artwork are of the first order, with pieces from the Krehbiel's own collections as well as pieces formerly belonging to the Cootes, either purchased at auction or directly from the family.

But it's the intangible unquantifiables that make Ballyfin transportive, the no-holds-barred conceit the property is less a hotel than a private country house lived in by a single family for generations, with exterior and interiors reflecting its owners' interests and travels, quirks and eccentricities, dreams and passions. Thus has Ballyfin been reborn. An escape from the mere. A mirror reflecting an inspiring vision. A portal to ... Otium.