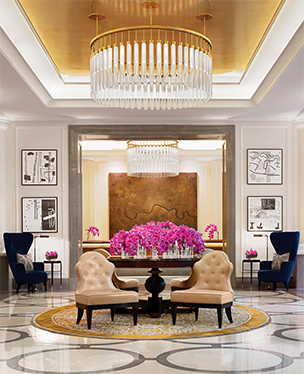 Circular patterns are a recurring design element in the hotel lobby. 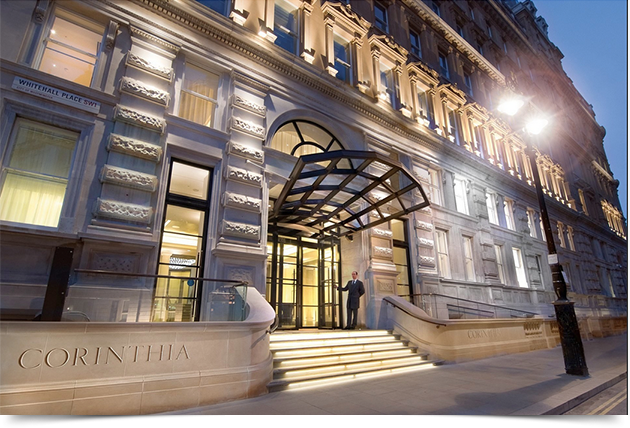 The grand entrance to the Corinthia Hotel London. 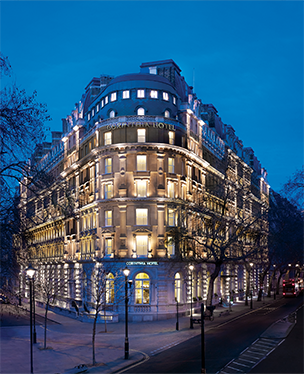 Originally built in 1883 and the former home of the Hotel Métropole in the 1920s, London's historic five-star Corinthia Hotel is located in the city's power center of Whitehall Place.
by Cathy Whitlock
Corinthia Classic
High Society Meets 21st-Century Drama in London

Just a stroll away from the River Thames, between the power epicenter of the Houses of Parliament and Whitehall Place, Corinthia Hotel London represents the perfect marriage of Old World grandeur and 2lst-century design. 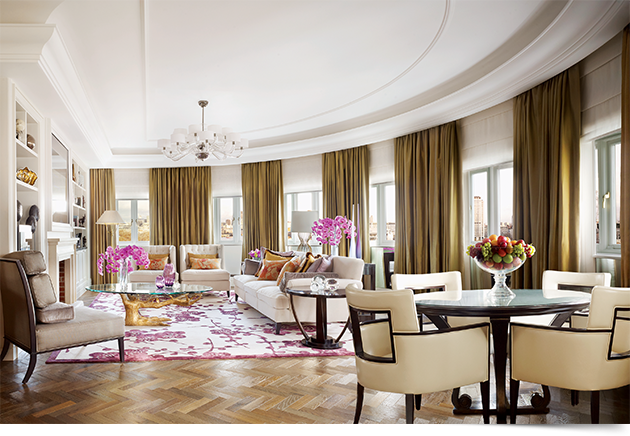 Fit for a King. The elegant designs of the two-story Royal Penthouse reflect a sophisticated palette.

Steeped in history, the Corinthia is housed in a 125-year-old building that began as the prestigious Hôtel Métropole, a place where fashionable dinner parties and society balls were the order of the day. The building later became Sir Winston Churchill's Ministry of Defense during World II.

Recently renovated and relaunched, the original charm of the opulent Victorian architecture has been retained by the London-based design studio GA Design that decorated the lobby, ballroom, spa, 294 guest rooms, 36 luxury suites and seven penthouses. Inspired by the designs from stately grand English homes, the hotel's interiors were given a contemporary twist while staying true to the theme of a grand hotel. 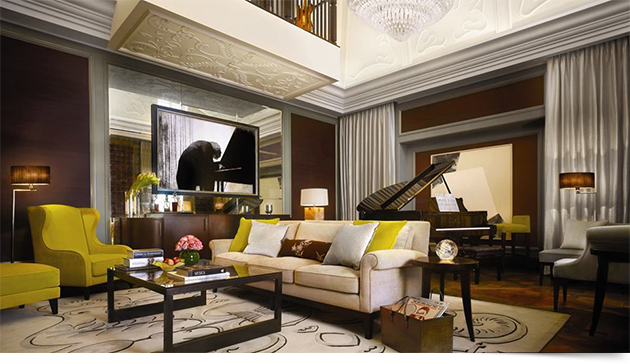 A classic Steinway Model O piano can be found in the Musician's Penthouse suite.

Upon entering the hotel, visual senses are immediately heightened by the Lobby Lounge's showstopping focal point — the Full Moon crystal chandelier, a glistening celestial spectacle with light emitting from within each of the 1,001 crystal globes created by Parisian designer Chafik Gasmi and produced by Baccarat. Situated in the room's soaring dome, the chandelier is the largest and only one of its kind. 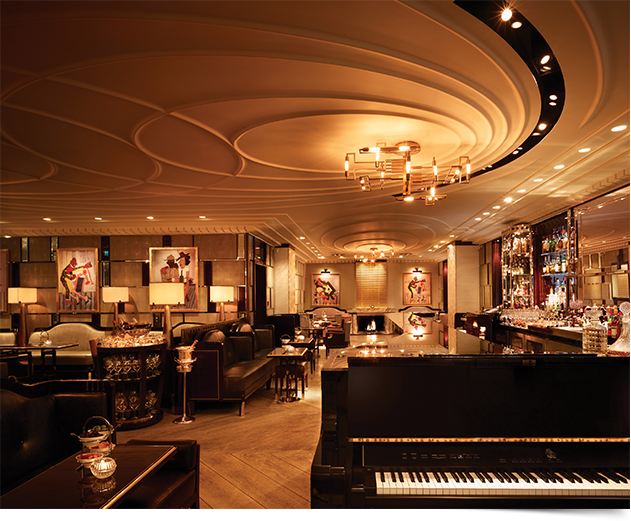 The designs of the Bassoon explore the parallels between music and design with the interior's centerpiece, a 20-foot grand piano bar.

Stars like Oprah, Cameron Diaz, Colin Firth, Rihanna, and Kirsten Dunst (just to name a few) are drawn to the hotel's distinctive design elements where craftsmanship remains supreme. From the century-old printed leaves dotting the elevator doors, to the bathrooms ensconced in marble from the same quarry from which Michelangelo sourced his materials, it's all in the details. And as is popular in hospitality, 250 specially commissioned original artworks, predominately by British artists, grace the walls of the hotel. 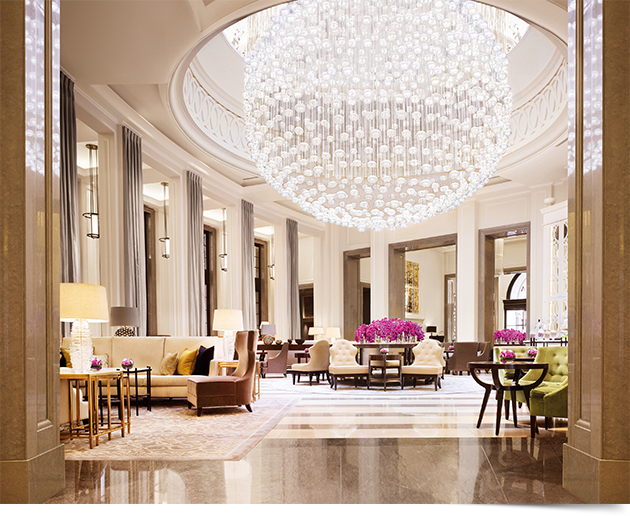 The magnificent Full Moon crystal chandelier is the show-stopping focal point of the Lobby Lounge.

At the forefront of the hotel's unique identity are the seven themed penthouse suites. Each two-story accommodation is tailored to the characters who might inhabit them — Explorer, Writer, Actor, Musician and Royal — and designed with its own internal elevator, private dining room, spectacular stairway and roof-top terrace with panoramic views of the city. 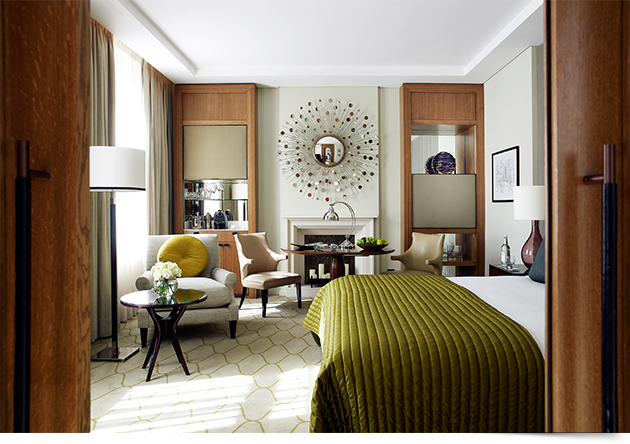 Themed touches abound — the Musician's suite features a classic Steinway piano and state-of-the-art record deck while the Explorer's site evokes the elegance of the Belle Époque with a chandelier of a mechanical model of the solar system. The sophisticated Actor's suite is a nod to Old Hollywood with dark parquet flooring, blue-painted raised and fielded paneling, a movie poster from Casablanca and a cocktail cabinet to complete the look. The Royal Penthouse boasts an oval 10-seating dining room with a highly polished Makassar ebony table and mirror-paneled walls. Goatskin bedside tables and a bedframe of walnut and leather are just further examples of the most intricate craftsmanship and attention to detail. 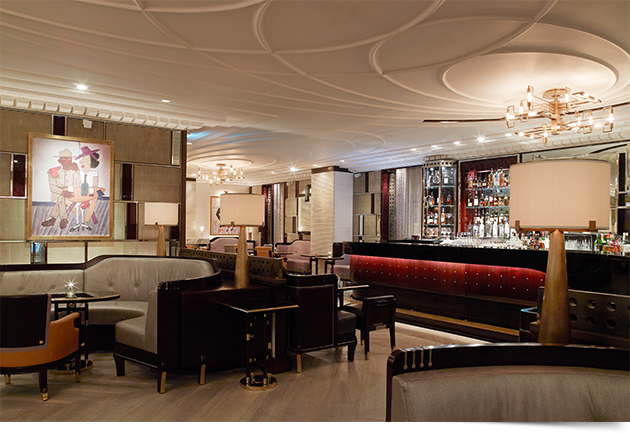 Evoking an atmosphere of a private club, the intimate space is bathed in luxurious tones of cream and black and features the artwork of 20th-Century African-American painter William Johnson. Courtesy of Corinthia Hotel London.

London designer David Collins designed the hotel's eateries and bars: Bassoon, Massimo Restaurant and Oyster. Bassoon's 23-foot-long piano forms the bar top surrounded by a Gatsby-era inspired Art Deco room with smoked glass doors. The walls, ceiling, and furniture all take their cues from the musical references to highlight the parallels between music and design as Collins notes, "Shagreen wrapped and musically referenced, this beautifully engaging room offers an experience which envelopes the senses." 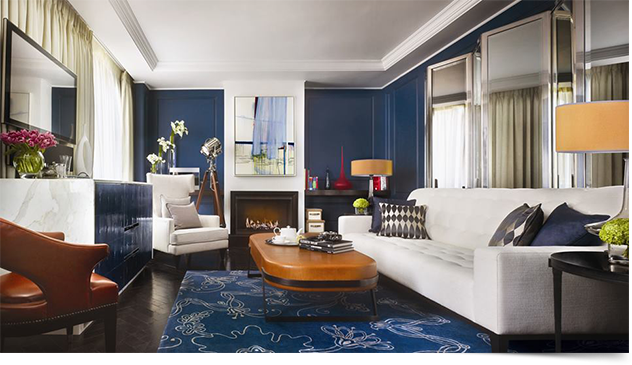 The Actor's Penthouse is one of seven themed suites.