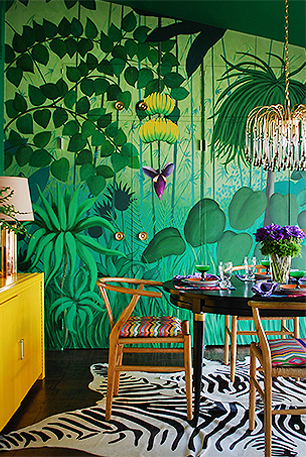 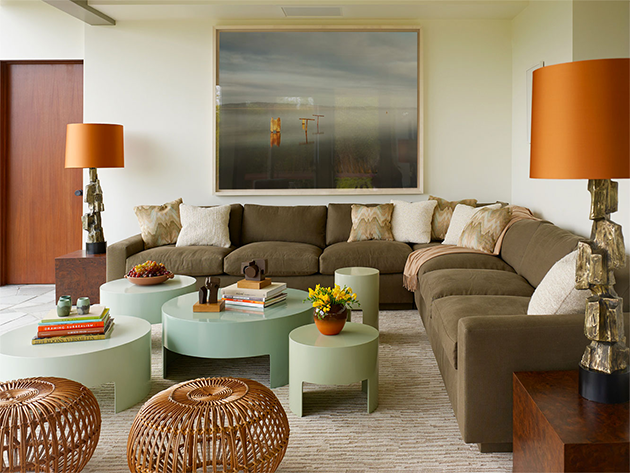 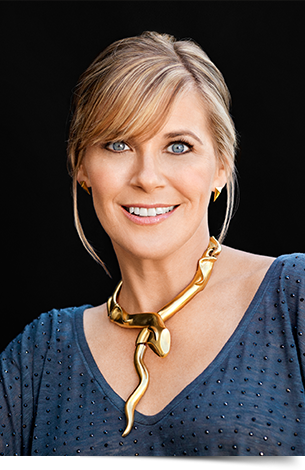 "My house? You mean my lab?" laughs designer Molly Luetkemeyer when asked about her home in L.A.'s famed Laurel Canyon. "It's ever-changing! L.A. can be very manicured, like Beverly Hills, or a wasteland with no trees along Wilshire, but up here I get my hit of nature." The 1959 "tree house," as she calls it, offers the Baltimore, Maryland-born transplant a generous dose of flowers, greenery and hummingbirds — all of which fuels her passion for color. "Sometimes it's a hard sell but people are finally warming up to it," she says. "A new client just said, 'Wait, I like it — go crazy!' It was music to my ears."

While designers often say that their work is inspired by their travels, Luetkemeyer will tell you she's inspired by "the fantasy of what I've seen," likening her take on design to French Post-Impressionist painter Henri Rousseau's jungle scenes. "Rousseau never saw a jungle in his life! They're his idea of what a jungle looked like. It's imaginative and charming." So entranced was the designer by his works that she commissioned a mural by local artist Jeff Robinson for her dining room, incorporating elements of the canyon, both real and make-believe. It's Rousseau's fantasy made her own, and it exudes the inventiveness that has earned her myriad commissions from so many like-minded creatives. Being L.A., most of the designer's clients are in the film and television industry, including her sister, Emmy-winning actress Julie Bowen whose home in a neighboring canyon brought the designer accolades. Luetkemeyer herself came to Hollywood to work on a Mike Nichols film but ended up following her bliss to UCLA's interior design program and jobs with Kelly Wearstler and Antonia Hutt. Now 15-years strong, Luetkemeyer's M Design Interiors is one of the most in-demand firms on both coasts. 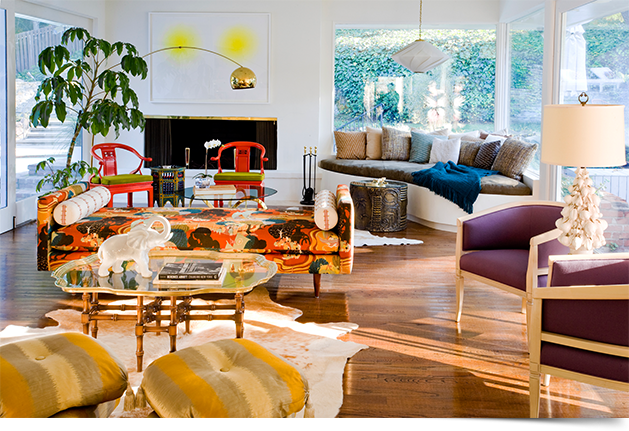 Newly returned from New York, where she has several projects in the works (like the restoration of a 1910 hunting lodge with David Hottenroth of Hottenroth & Joseph Architects), the designer is gearing up for L.A.'s many design shows and fetes, including special window displays for Harbinger by Hand, the new artisanal boutique from her friend and fellow designer Joe Lucas. She's also at work on a collection of rugs inspired by tree bark she's spotted on walks near her home.

"Every project is personal because the needs are so different. If that weren't the case, I'd be bored," says Luetkemeyer. Thanks in part to her New York projects, the designer has developed a new appreciation for Josef Hoffmann and the Wiener Werkstätte, and the Arts and Crafts movement (especially the Gamble House in nearby Pasadena designed by Greene & Greene in 1908). "I love the simplicity of the lines." But she's quick to add that she's also "a '70s girl" who loves Vladimir Kagan and Willy Rizzo. "As long as there's scale and harmony, anything can work."

And while she's known for frequenting L.A. furnishings galleries like Reform and Blackman Cruz, she's equally happy shopping online, citing a great pair of Gabriella Crespi stools she snapped up on eBay. "Sometimes I'm on the hunt for something specific, sometimes I'm looking for something to surprise me. I like things that maybe aren't 'on trend' — whatever that means. Because if there's one thing I can't do," she sighs, "it's cookie-cutter."