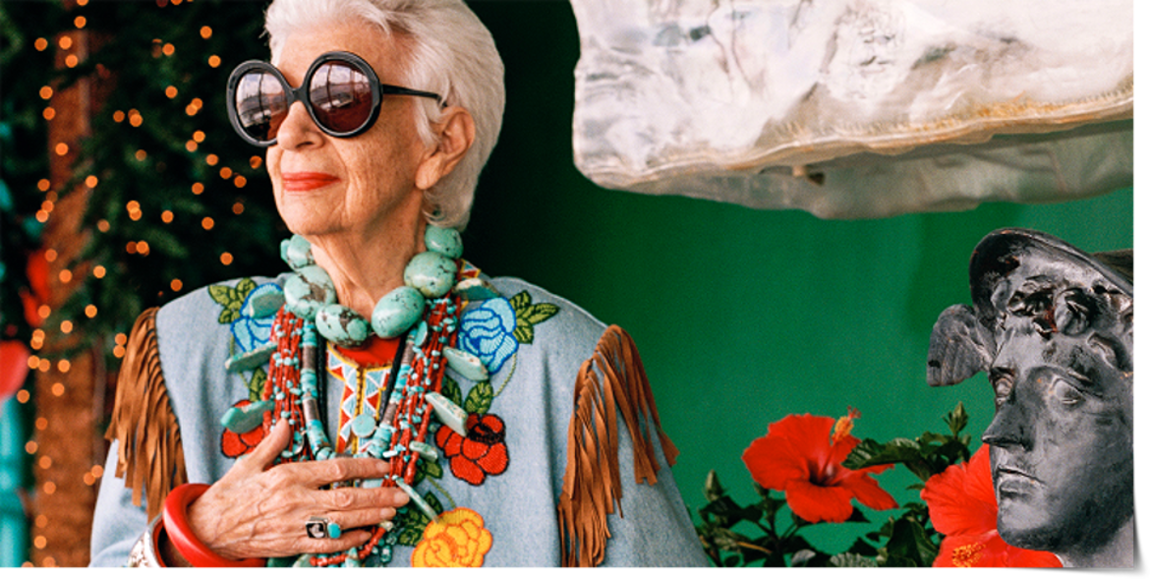 On a trip to London, Iris Apfel spent a rare morning off from promoting the documentary IRIS, shopping with her beloved friend and British clothing designer Duro Olowu. Four hours later, she returned to our hotel with thirty pounds of neatly folded African fabrics, edges frayed. Eyeing three weekend bags stuffed with a king's ransom of costume jewelry and trunks of clothes (admittedly, she had up to five daily appearances), I began dreading how we would transport her new treasures home. As if reading my mind she said, "I'll have to buy another suitcase. They're too gorgeous to ship."

Despite being the subject of "Rara Avis" the dramatic 2005 exhibition at the Metropolitan Museum of Art's Costume Institute that celebrated her eccentric style, Iris has never considered herself a serious collector or Olympic shopper. Still, she's worn out inveterate "lookers" including Harold Koda, the (soon-to-retire) director of the Metropolitan's Costume Institute, who retreated to a shaded bench during a shopping jag at an outdoor market while Iris carried on like an anthropologist on an imperative dig. What separates Iris from being a serious collector, it's been said, is the fact that she doesn't buy to round out a collection, or corner markets.

"I just know it when I see it," she often says, rendering her clothing and jewelry a completely personal reflection of what moves her on a deeper level.

The life of this singular woman is the subject of documentarian Al Maysles' penultimate work, IRIS available on DVD and Netflix. As Iris continues to travel the cycle continues - she's discovering new stores and markets, making new friends and having a blast.

Iris lives her life the same way; she trusts her gut, rescues diamonds in the rough, and takes advantage of opportunities which other more ambitious types might have turned up their noses.

If shopping as a metaphor for life sounds like a stretch, consider this - Iris has parlayed her shopping into a couple of careers and inspired us all in the process. She and her late husband, Carl, founded the textile company, Old World Weavers, as an answer to wanting a particular blue she imagined for a sofa in a design client's living room. If Iris couldn't find it, the thinking went, it must not exist, so she hired a weaver to make it. Old World Weavers took off and soon the company was providing historically correct replicas of faded fabrics for world-class museums, The State Department and several administrations of the White House.

The couple traveled to far-flung locations including Turkey, Morocco and Lebanon, in search of weavers and fabric sources. They planted themselves in places like Naples, Italy for weeks to be sure orders were filled to their specifications. Meanwhile, they shopped for accessories and furniture to sell in their showrooms, which attracted clients like Estee Lauder, Marjorie Merriweather Post and Greta Garbo who climbed the stairs to their walk-up East 57th Street showroom.

Along the way, Iris collected vintage clothes, textiles, and jewelry. She never worried if something fit. Dresses that were too small were whipped into pillows - like Scarlett O'Hara in reverse - a nun's habit became a formal gown and church vestments were resurrected as evening pants. Iris was repurposing before environmentalists coined the term. She purchased loads of costume jewelry because it was as versatile as it was fantastical, and she didn't worry about traveling with it. Her extensive findings were the basis for the Met show that would change her life forever. The press termed her a "geriatric starlet" and a "fashion icon." She modeled for Coach, designed a sell-out line of garish colored cosmetics for MAC and continues to design clothing and jewelry for HSN.

Iris purchased another suitcase to transport the African fabrics back to the New York: whether they become clothing, bedspreads, pillows or tablecloths are anyone's guess. Including Iris'. When it's right, she'll know it, and we'll all want to see it.

Jennifer Ash Rudick is a New York-based writer, editor and producer of the 2015 documentary IRIS.