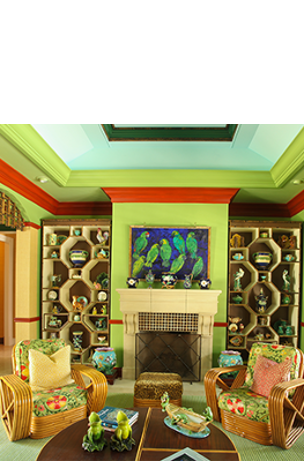 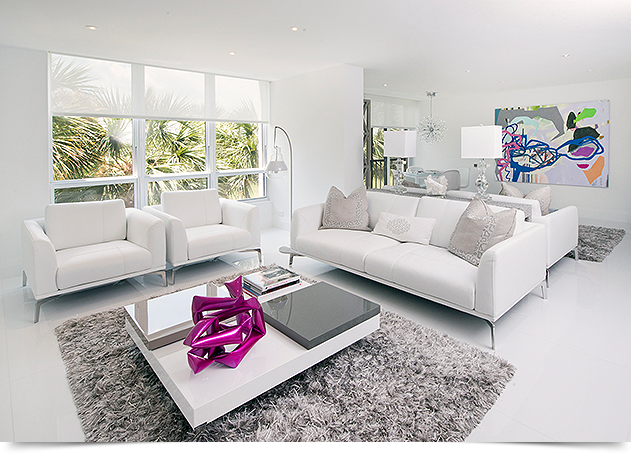 A cool, sleek and modern mid-century style was employed for a house in Boca Raton. 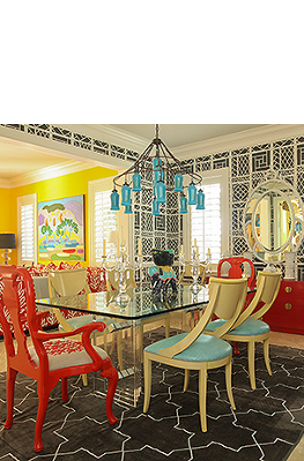 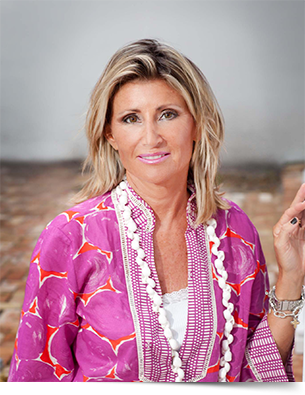 They also share a kindred design sensibility: one that's regionally distinctive, but not for the slightly kitschy beach motifs too often associated with other parts of the state. South Florida consumers embrace a regional decorating noted for its sophistication, and they are precisely the clientele for whom Stefani de Laville created her boutique design business, Coco House & Company.

"My clients are very well travelled and informed people who have usually done many homes around the country or elsewhere. They also have used very well-respected designers in their time. I am always honored when they select me for their new residence here in Florida," says de Laville. "Florida has become a very international market, which constantly keeps my work interesting." 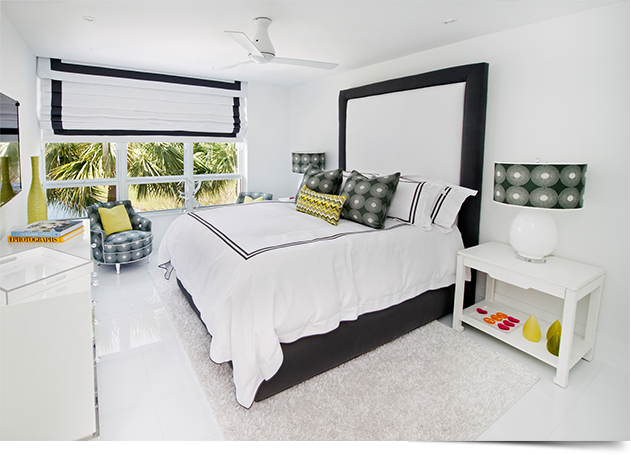 A tailored black and white bedroom with pops of pistachio highlight the design scheme for a home in Delray Beach, Florida.

An interior designer for the past 15 years with a background in fashion prior to that, she's up for the challenge. The native Midwesterner attended Miss Porter's School in Connecticut before studying at the Sorbonne and at the American University of Rome. She holds a BA in art history from Columbia University. 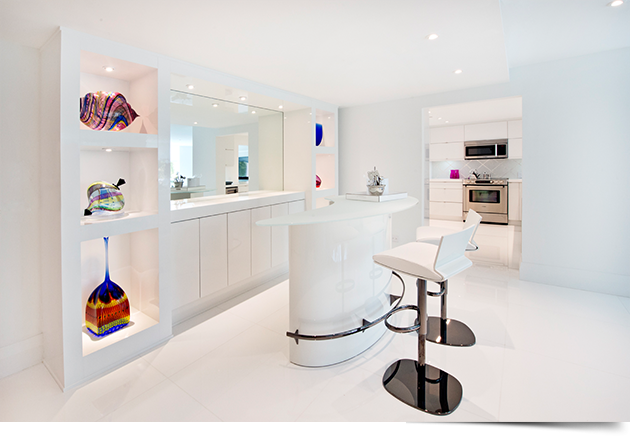 A home bar in Delray Beach, Florida pays a nod to the Sixties.

De Laville describes Florida style, overall, as essentially bringing the indoors out, and the outdoors in, much like design in California. "Because of our beautiful weather and light, people want to feel as though they are on a permanent vacation even when they might actually be living here full-time. They love outdoor spaces that function like those indoors—covered porches equipped with TVs and fireplaces are in great demand." 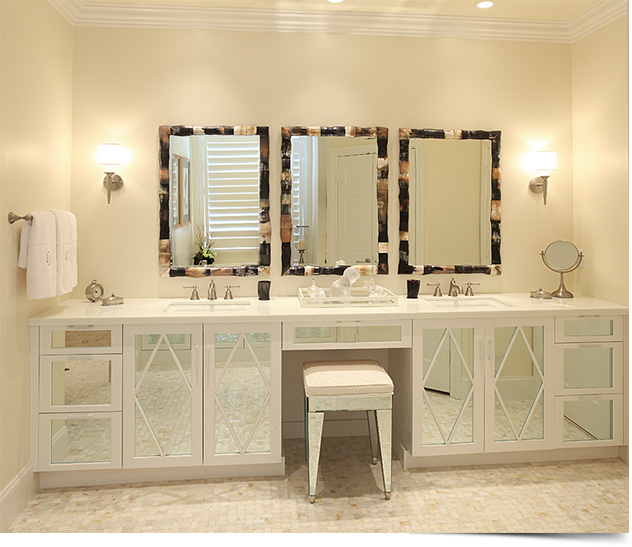 Balance and symmetry are the order of the day for a bathroom in Jupiter, Florida.

But because Florida's climate is so much warmer than California's, its design has less tolerance for decorating elements that are even slightly heavy-handed. "Everything needs to lighten up, from the heaviness of furniture to the texture of the fabrics," says de Laville. Spanish Colonial designs that are an integral part of the West Coast's architectural heritage and decorating, for example, would feel overbearing and oppressive in the Sunshine State. 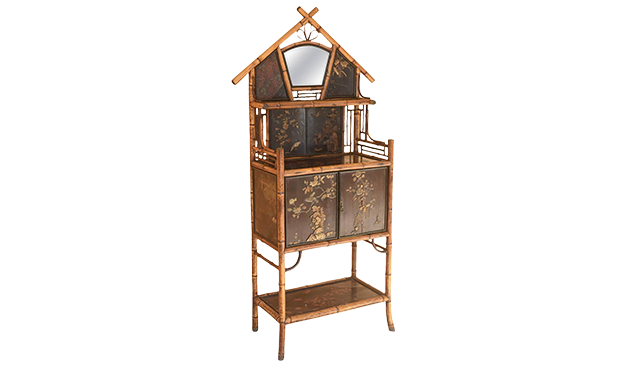 So instead of embracing an indoor-outdoor lifestyle and calling it quits, South Florida design pulsates with more of an island spirit. One of de Laville's favorite interpretations of it is something she calls Bohemian chic. "Bohemian chic for me is a combination of the classics with a whimsical twist. It is not necessarily the obvious, but it works!"

Organic, light rattan furniture used both indoors and outdoors is a major component of her take on the style. "As is lots of great color on the walls and on fabrics, as well as a nod to past decorators like Dorothy Draper or Addison Mizner," she says.

"And let's also not forget the all-white rooms and houses, which are a big part of Palm Beach design," explains de Laville, whose portfolio includes a nearly even distribution of splashy bright (think Lily Pulitzer and deeper) and quiet white incarnations of the style.

Within the regional character lies great diversity—plenty of latitude for a client to make a personal style statement. "I like to think of my design as not a particular style, but one that evokes the personality and mood of the client," de Laville explains. Like designers from all parts of the world, "I try to help them realize the way they want to live and feel when in their home. Most of my clients know exactly the feel they want by their various travels and constant combing of design sites and magazines, but they don't know how to achieve this on their own. My job is to help them interpret their dreams and desires by introducing them to the vast array of products on the market. On the other hand, a big part of my job is also helping my clients edit down and refine what they want, because they see too much and like too much," she says. 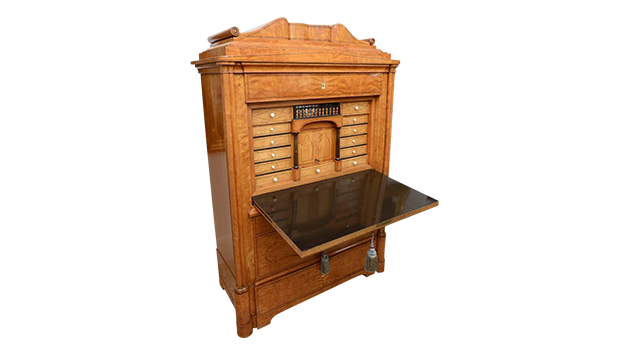 Architecture influences her work. "In addition to listening to my clients, I like to consider the actual bones of the house or condo that I am doing. Some places have already great architectural details that should be preserved and respected, while others are merely a blank canvas." Because Florida is a sunny state, "lighting also plays a huge part." Getting the lighting right entails calming a home's harsher exposures, accentuating the natural light in other areas, and, always, making rooms sparkle and glow romantically at night.

Bohemian chic, though fun and possibly flamboyant, is not to be mistaken with fads. "I want to give longevity and a feeling of timelessness to a room or home. I do like some elements of trendiness, but I think that needs to be combined with items or antiques that are the antithesis of the trend."

For that reason, her design studio dovetails with the antiques business operated by her husband Serge. "Years ago we started collecting 19th-century English bamboo because that was all we could afford at the antiques shows, and then we turned it into a business when our collection grew to be too much. I love these pieces because they can work into most any decor other than very modern or contemporary. Antique bamboo furniture is useful and practical. A small table may turn into a larger card table, a secretary may have a hidden compartment. They are whimsical, they have history, and bamboo is strong!"