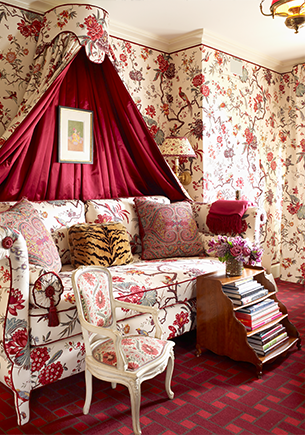 The designer used a single fabric with a cream background for the wall and furnishings. 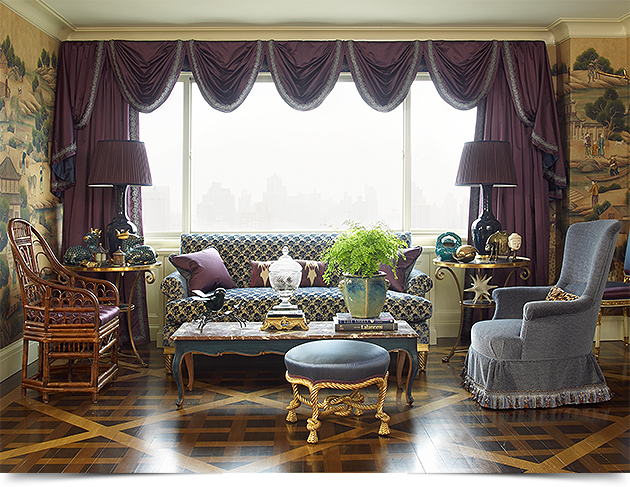 Formal purple drapes with a swagged valance set off the views of Central Park 32 floors below. 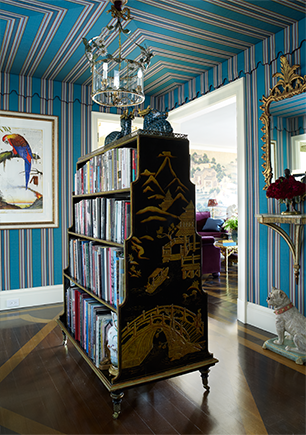 A double-sided chinoiserie bookcase atypically placed smack in the center of the entrance hall is one of Papachristidis's favorite pieces.
Photo courtesy of Alex Papachristidis.
by Candace Manroe
Storied Abundance
The Manhattan apartment of interior designer Alex Papachristidis reveals his penchant for colorful plentitude and its sidekick, an irrepressible joie de vivre. 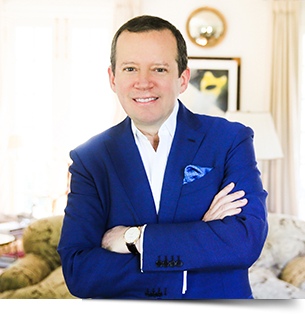 How does someone live with the exuberant likes of Alex Papachristidis? He's the first to tell you: "When my partner Scott [Nelson] moved in fourteen years ago to my previous apartment, he said, 'I really don't understand how you can live this way — with collections absolutely everywhere, and everything so chock-a-block.' After living together ten years, we attended an Elle Décor showhouse where the spaces were white, spare and chic. He turned to me and said, 'I don't understand how people can live this way.'"

Welcome to the private life of the celebrated New York designer who had not a clue growing up, or even into early adulthood, that design was his special gift to the world.  "Initially I thought I would enter the family business, which is shipping. All the Greeks are in shipping," he laughs. Next he pondered a career in fashion, then restaurants, ultimately rejecting both without dipping a toe in the rough waters of either. He fumbled a few more prospects, landing in insurance, before a tête-à-tête with his closest friend flipped the proverbial light-switch that illuminated his destiny. "She said, 'Alex, you have such great taste, you should be a decorator.' I gave her a kiss and ran off to Parson's." 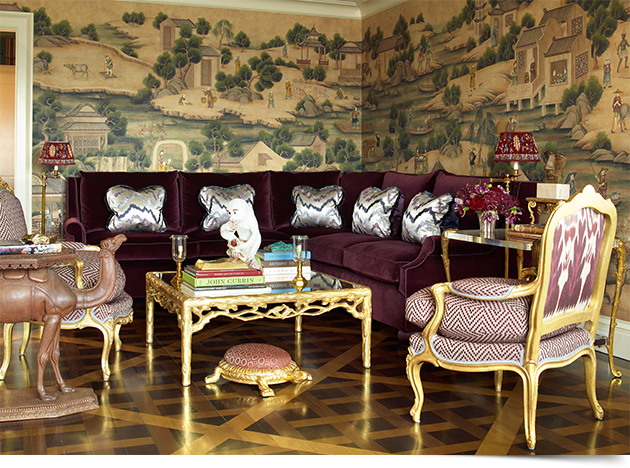 The handpainted chinoiserie wallpaper by Gracie, a must-have on Papachristidis' checklist.

The 1970s-vintage apartment Alex and Scott moved into in 2012 had little going for it other than its splendid 32nd-floor views of Central Park. So before moving-in, the designer retained Fairfax & Sammons Architects to renovate the open spaces to conform to his more formal vision. "I'm a Francophile," he says as explanation for the resulting floor plan. The 14-month project called for a proper entrance hall followed by a classical enfilade of living room, dining room, and library (a former bedroom) melded together by matching archways and divided by pocket doors. The succession of spaces aligned on a single axis provides a ceremonial sense of progression firmly rooted in Baroque architectural history. 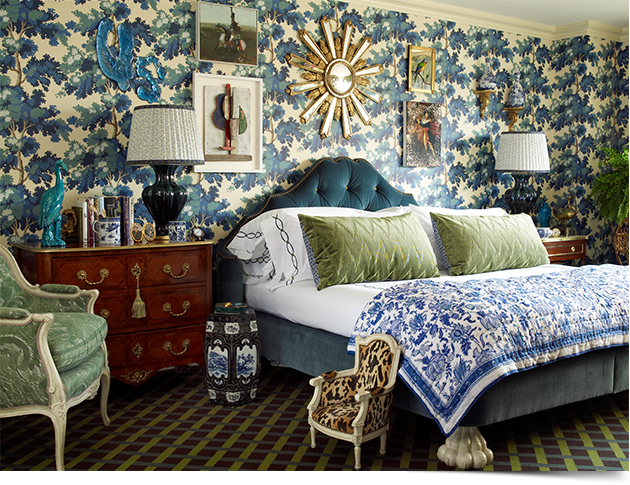 The bedroom carpet is one of Papachristidis' own designs for Langhorne.

At Papachristidis' apartment, the formal floor plan flows like the chapters of a juicy story. Each space contributes to the tale, and like a cliffhanger chapter, leaves you hungry for more. The story begins with a tented entrance hall like those featured in French decorating books from the 1950s, and a stenciled take on a classical Parquet de Versailles floor. "The apartment is comprised of all the decorating fantasies I'd had that I hadn't done yet," reveals Alex. "I'd always wanted a French-style tented entrance hall, and I knew I must have a hand-painted Gracie wallpaper of a Chinese village scene in my living room, which everything else could play off of, and I wanted a velvet-upholstered library. Overall, I designed this to be a little grander than my previous apartment."

A palette of jewel colors enriches his vision. From the bright turquoise and sapphire in the entrance hall's tented stripe to the deep amethyst living room and the library's velvet amethyst walls with garnet and ruby accents, the palette is supremely self-assured. Each space unfolds another dazzling hue with no second guessing or backward glances.  And the palette in each is strong enough to support the multifarious menagerie that inevitably bustles within. "I've always loved animals. I collected stuffed animals as a child, and I collect animals as an adult," says Papachristidis. A parrot painting in the entrance hall is the Pied Piper leading the apartment's parade of mainly exotic critters, which includes numerous examples of avian life as well as camels, elephants, tortoises, deer and dogs — any and every creature is welcome, with the couple's beloved Yorkie, Theodore (aka Teddy), treasured above all. 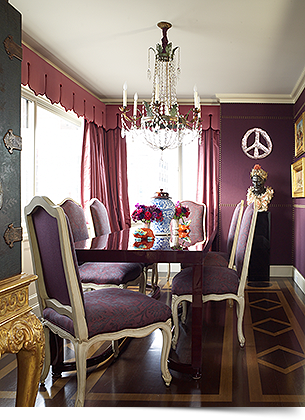 In addition to his collections of animals and nature-themed art and accessories, Papachristidis collects chinoiserie, Chinese and Japanese porcelains exported for the European market and mounted in France, French furniture, books, his own custom-colored lamps designed for Christopher Spitzmiller, and "anything having to do with the table: flatware, dishes, linens, silver trays. I'm always on the shopping hunt wherever I go. I'm a little over-stocked — satiated — now on these, so the only thing I'm really looking for are silver chargers."

Some additions to his collection come easy and aren't particularly pricey. "Like the little enamel tray in the library I found in Soho years ago. Price is nothing I care about. It's about what I like and what I regard as beautiful." Other pieces require a bit more work...and money. For years, he had admired a Tiffany flatware creation with porcelain-feathered handles designed by Jean Schlumberger. When the family of Bunny Mellon put it up for auction, he was ready — even though it meant bidding, unknowingly, against a close friend. "I'd always wanted it, and I finally got it."

These personal stories and the collections, objects and animals (living or artistically created) gleaned from Papachristidis' life, travels and studies are what imbues the designer's and Scott's apartment with inimitable character and, like the best tales, a joyful denouement.