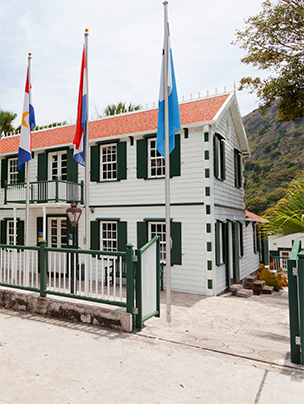 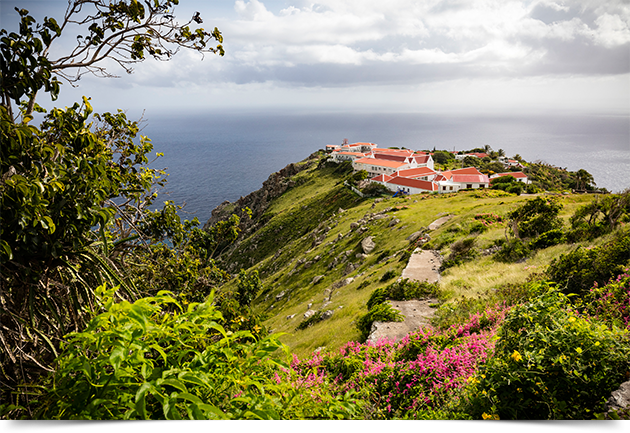 A seaview of Saba's local school.
All photos, unless otherwsie noted, are courtesy of @cees timmers/www.tvc-advertising.com 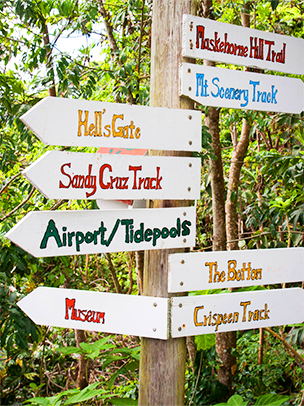 Visitors are offered a variety of destinations in Saba.
by Andrew Myers
The Chic, ReverseChic Retreat: Saba
Queen of the Unspoiled Caribbean, the Tiny Island of Saba Reigns Unrivaled as a Buttress of Sanity and Redoubt of Otium.

Discord. Disproportion. General dyspepsia and overall orneriness? Bywords, nay diagnosis, of late autumn and early winter. More crucially for our purposes, they also describe conditions anathema to the Zen of Design.
How to right the state of one's internal union? You could retreat to a self-imposed internal exile, as scholars, artists and intellectuals did in 17th-century China during the reigns of "bad" Manchu emperors (and the occasional dowager empress). But said approach is not in accordance with our nation's republican and democratic principles. Plus it's no fun. Instead, why not go to an aesthetic safe spot, political palette cleanser, and place of beauty wrought by nature and sculpted by our species? Hello, Tag, bienvenue, salaam ... Saba!! 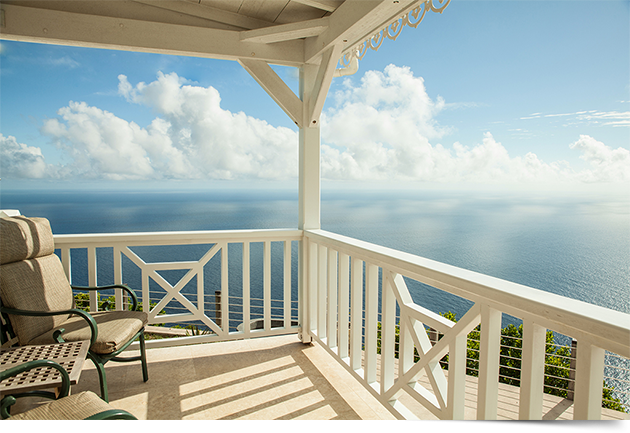 A view from Spyglass Villa.

Never heard of it? Exactly the point. For the uninitiated, Saba—pronounced "Say-ba," the verdant, vertiginous, dormant stratovolcano that bursts out of the ocean blue just southwest of Saint Maarten and Saint-Barthélémy, home to a population just north of 1,900 who live in cottages, houses and villas with universally white wooden facades, green shutters, red sloped roofs, and gingerbread woodcut adornments gathered in four uniformly picturesque villages spread over less than five square miles, and all connected by a single road, a masterpiece 20th-century engineering called, in the unpretentious manner of the island, The Road—was sighted and named-but-not-claimed by Christopher Columbus in the world's first no-frills, all-inclusive Caribbean cruise, anno domino 1493. His night reading at the time was, reputedly, The Bible, specifically passages involving the kingdom of Sheba, from which the name derives. 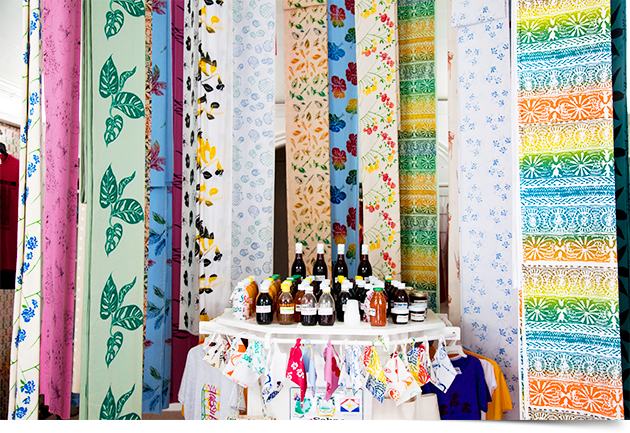 Colorful batiks can be found at the Saba Artisan Foundation.

Why didn't the intrepid Italian make a pit stop? Please note the word "vertiginous" in the paragraph above. There are precipices. Cliffs. Escarpments. There are no endless white sandy beaches. None whatsoever. In fact, until the very end of the 19th century, all cargo was unloaded from ships anchored in the deep water of Ladder Bay on the island's western side, then rowed via longboat through the rough surf to shore, whereupon each and every imported object was carried by hand and foot, and back up The Ladder, 800 steps carved into stone leading, after 40 minutes, to Saba's capital, The Bottom. 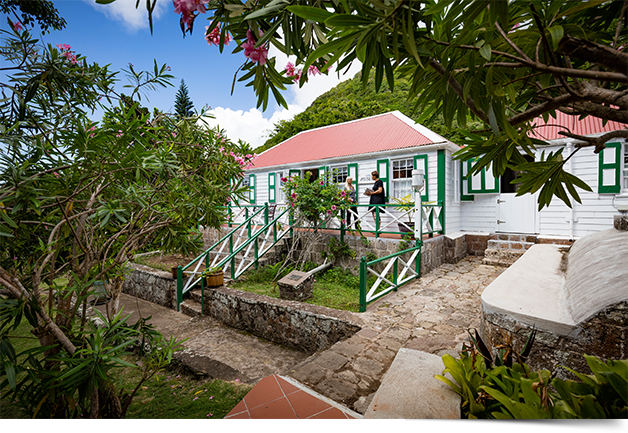 Life in early Saba is depicted at the Windwardside Museum. 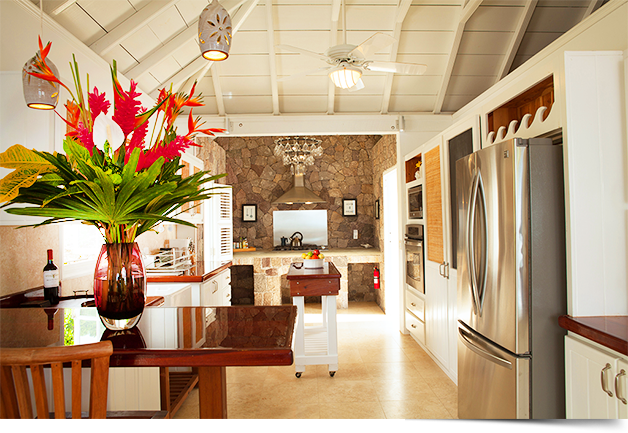 Contemporary meets Dutch in the kitchen at Spyglass Villa.

How steeply isolated are we talking about? The aforementioned Road, deemed an engineering impossibility by conventional wisdom, was started in 1938. And finished in 1958. The first motorized vehicle didn't dispense carbon dioxide on the island until after World War II. The airport, boasting the world's shortest commercial landing strip, didn't appear on the 1,300 relatively flat feet until the early 1960s (even today only small prop planes with specially trained pilots are cleared to land, and YouTube documentary videos abound). And there was no permanent pier allowing for ferry service until 1972. 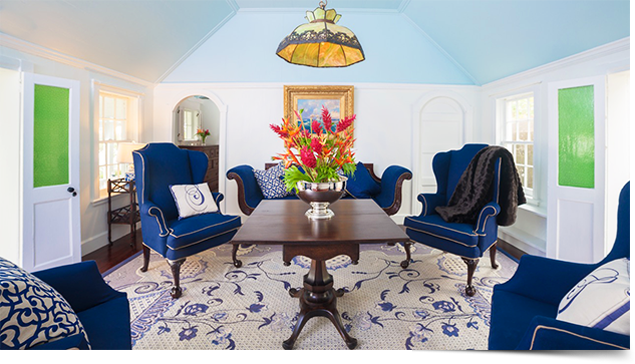 Ocean shades of blue are the primary color palette in the Hidden Garden Villa located in Windwardside.

A natural fortress, Saba was home to English pirates in the 1600s ("Dead men tell no tales" was reportedly quipped by the Saban skull-and-crossboner Hiram Beakes). And while the island has flipped-flopped in terms of nationality amongst England, France, and the Netherlands, the Dutch flag has flown uninterruptedly since 1816. Which makes the aptly named Mount Scenery, Saba's highest stand at 2,877 feet, also the highest point in the famously flat Kingdom of the Netherlands. It's a terrain and topography that has affected its inhabitants as much as its inhabitants have shaped Saba, which is an island of independent, hospitable, sophisticated people whose first language is English (although Dutch is taught in the schools), who use the U.S. dollar as the common currency, but who nevertheless feel a strong affinity and connection for the Dutch crown, government in the Hague, and Holland's broad-minded, inclusive social policies and practices. 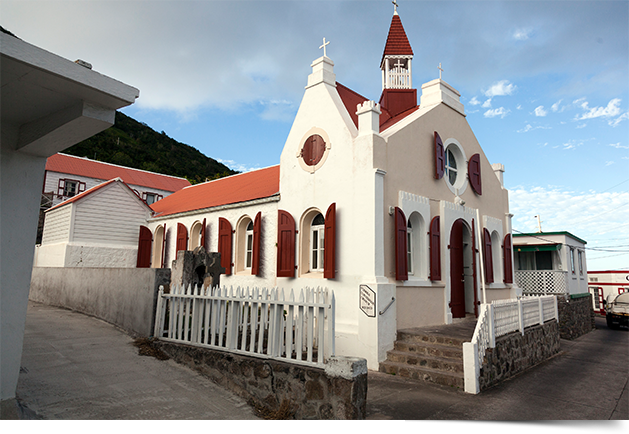 They're also islanders who cherish what Saba offers as well as what it does not. In the previous category: a natural, protected and sustainable bounty that ranks Saba at the top of the world's most desirable diving destinations (with not less than 30 diving spots adjacent to the coastline, all within the 3,212-acre Saba Marine Park), as well as scores of varied hiking and walking through jaw-droppingly diverse micro-climates that stretch from sea-level to the crest of Mount Scenery; a roster of top-toques restaurants, albeit with an island-casual vibe; and an array of accommodations from the full-service Queens Garden Resort & Spa with its amazing masseuse, to historic, antiques-filled cottages, to cliffside villas. In the latter? Mega resorts, mass tourism, cruise ships, jet skis, internationally ubiquitous boutiques, and booze-and-narco-fueled nightlife. 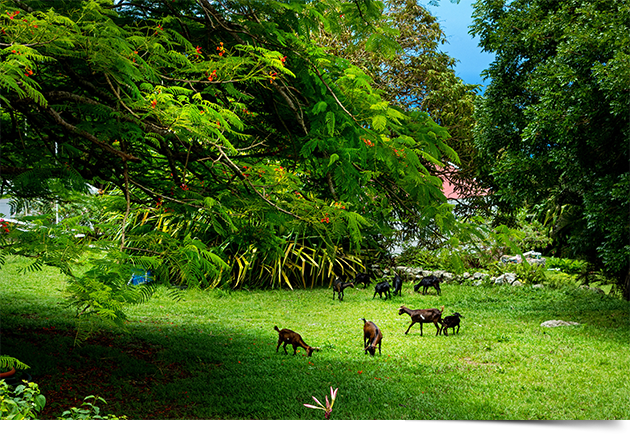 Playful goats are plentiful throughout the island. Photo courtesy of Laurent-Benot/www.tvc-advertising.com.

In short, it's not a ringer for St. Maarten, never mind St. Bart. Rather, Saba, which looks eerily similar to Capri when approached from the water, is a place of repose and recomposition. Reflection and refueling. Where in escape, one can also find one's destination. Otium. 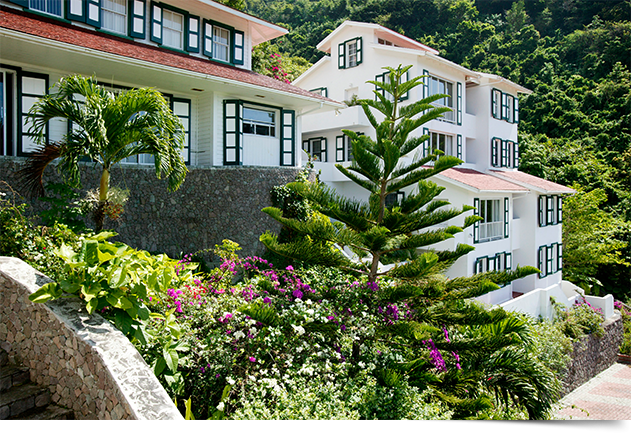