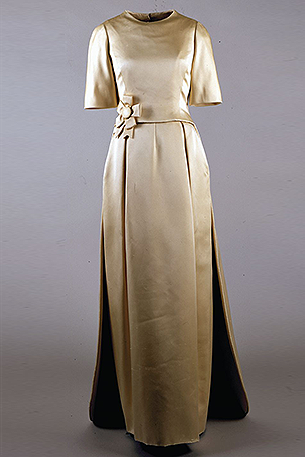 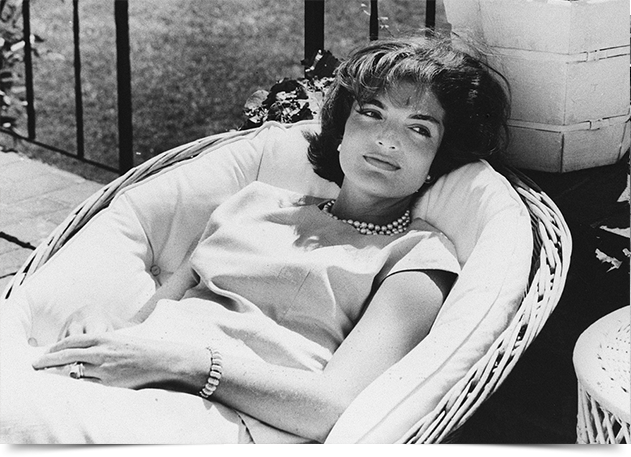 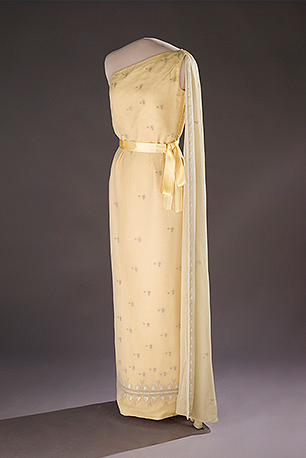 The First Lady wore this one-shoulder Cassini creation to a state dinner for the president of Tunisia. Photo courtesy of www.flickr.com
by Cathy Whitlock
The First Lady of Fashion and the Secretary of Style. An Icon Was Born

While Nancy Reagan owed her signature red wardrobe to Bill Blass and Oscar de la Renta, and Jason Wu and Narciso Rodriquez contributed to Michelle Obama's all-American style, it was the collaboration between fashion designer Oleg Cassini and Jacqueline Kennedy that proved to be the most groundbreaking of First Lady fashion. 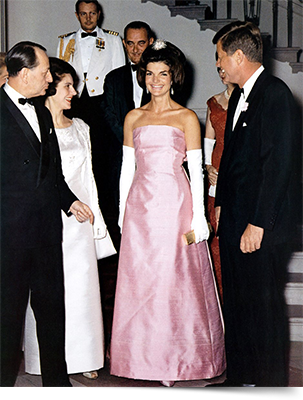 Bursting onto the world stage as the wife of the thirty-fifth president John F. Kennedy in 1960, Jackie would soon become one of the biggest fashion icons as well as one of the most photographed women in the world. Her partnership with friend and fashion designer Cassini resulted in "Jackie Style," revolutionizing the way women dressed not only in the '60s but in the permanent annals of fashion history as well.

Her style was classic American East Coast with shades of Parisian influence, and a welcome departure from the stilted fashions of the Eisenhower-era of the 1950s. Jackie's bouffant hairdo, streamlined sheath dresses, Roger Vivier pumps, Lilly Pulitzer frocks, Hermes scarves, oversize sunglasses, trademark pillbox hats and, last but not least, her signature three strands of pearls, created a lasting look that reverberates on the fashion industry today (with perhaps the exception of the pill box hat). Notes Cassini, "I believe she almost single-handedly created a revolution in good taste. No one knew then just how large an impact Mrs. Kennedy would have on the world of fashion, least of all Jackie herself. She would have found it hard to believe that an American President's wife, dressed almost exclusively by an American designer, would soon become the most emulated fashion figure in the world. " 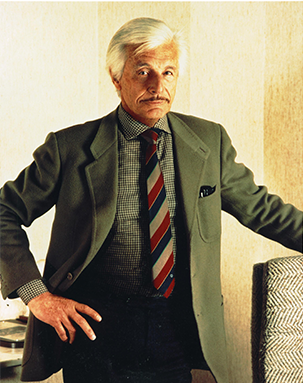 The Secretary of Style, Oleg Cassini.
Photo courtesy of olegcassiniblog.com 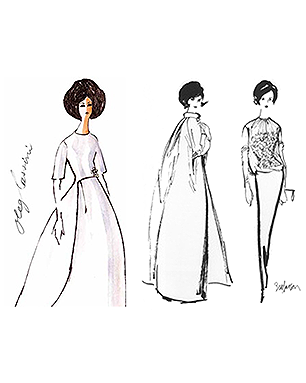 Coined the "Secretary of Style," Cassini, the former '40s and '50s costume designer created over 300 looks — coats, dresses, gowns and suits — suitable for Jackie Kennedy's life as the wife of the Commander-in-Chief, mother of two and her duties as First Lady in the short-lived era of Camelot. "When I thought of Jackie, I saw a hieroglyphic figure: the head in profile. Broad shoulders, slim torso, narrow hips, long and a good carriage. The rest was easy as I imagined her as an ancient Egyptian princess, dressed cleanly, architecturally...I would use the most sumptuous fabrics in the purest interpretations," details the designer in the book A Thousand Days of Magic. 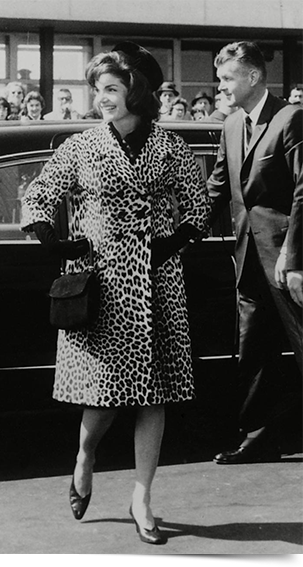 While some of Cassini's most popular looks were the large-buttoned cloth coat at the inauguration (that stood out in a sea of fur coats) and alluring one-shouldered evening gowns (not commonplace in the White House ballroom), his leopard coat proved to be the most coveted — and controversial. The A-line-double-breasted coat with three-quarter sleeves, made of real leopard fur (after all, the year was 1963) was designed for a trip to India. The look became an overnight sensation and sadly some 2500 leopards sacrificed their lives. As a result, a concerned Cassini only designed with faux fur, creating "Evolutionary Fur" made of synthetic fibers.

Long the subject of numerous books, television dramas and films, Jackie's life as the First Lady in the wake of her husband's assassination is the latest entry in the biopic Jackie (Fox Searchlight Pictures) that hits theaters December 2nd. Starring Academy Award winning actress Natalie Portman (who will no doubt receive another Oscar nod for her dead-ringer portrayal), wardrobe naturally played a key role in forming her character. "One of the most challenging was the red dress Jackie wears during her White House tour that most people only associate with the black-and-white television image," describes costume designer Madeline Fontaine who also copied the many Oleg Cassini suits in capturing her grace and elegance. "In fact, we had to make two different pieces, one red and one pink, to obtain the right shade of gray for the black-and-white television images," the designer says of the 1962 television special "A Tour of the White House with Jackie Kennedy." 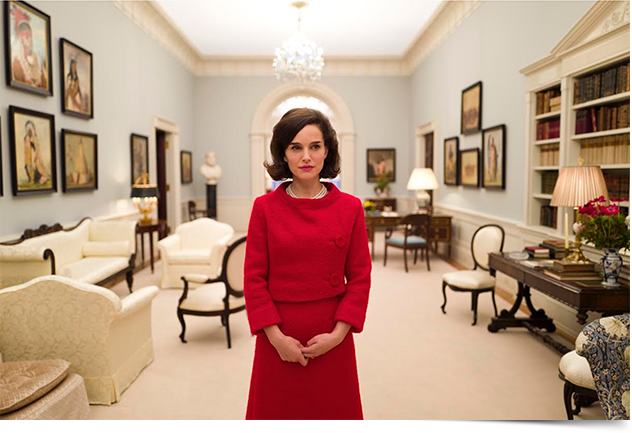 Perhaps Jacqueline Bouvier Kennedy Onassis' poise and humility through a very public life filled with both tragedy and happiness, coupled with her innate elegance and timeless style have made her the true icon she is. And why some 22 years after her death in 1994, it helps to explain why we are still fascinated by her. Another great style icon summed up her reign as First Lady the best, "Jackie put a little style into the White House and into being First Lady of the land, and suddenly 'good taste' became good taste. The Kennedys released a positive attitude toward culture, toward style...and since then we've never gone back."