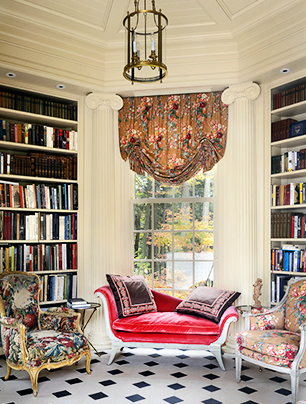 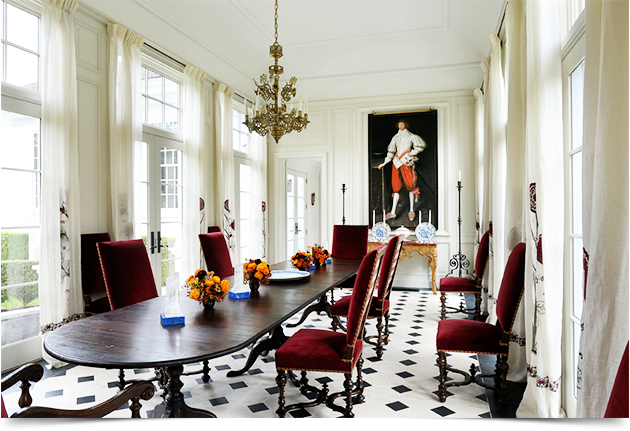 Important period dining table and chairs are flanked by two walls of French doors and windows in the designer's Connecticut dining room. Photo by Tim Street-Porter 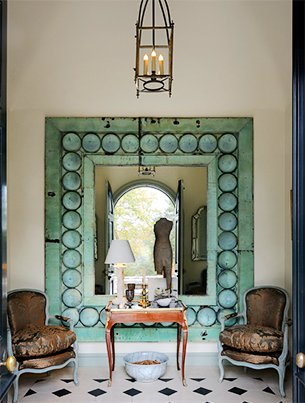 A verdigris mirror salvaged from a building in New York is the centerpiece in the designer's entrance hall. Louis XV table and armchairs by George Jacobs. Photo courtesy of Tim Street-Porter.
by Cathy Whitlock
The Opulent World of Robert Couturier
The French interior designer philosophizes on fate and the evolution of style.

For interior designer Robert Couturier, there was no proverbial "aha moment" that signaled his life's calling as he, somewhat facetiously, explains, "The knowledge that there was absolutely nothing else I was fit to do," made it an easy choice. 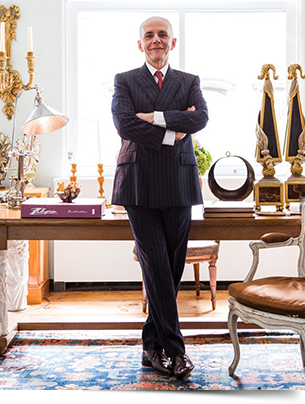 Being raised by his grandmother in 1950s Paris in the 16th arrondissement exposed Couturier to elegant modernist interiors at an early age. "Antiques, furniture, and art were everywhere, Jean Michael Frank had designed my grandmother's house and Jacques Adnet designed the furniture in my grandfather's office," he says.

Couturier's childhood was spent with pen in hand. "What I drew were ideal house interiors, showing 'happy' families and pets. I always had a keen knowledge of antiques and historical periods; when I explained all that to my philosophy teacher it was clear that architect/decorator specializing in residential design was the only way to go." 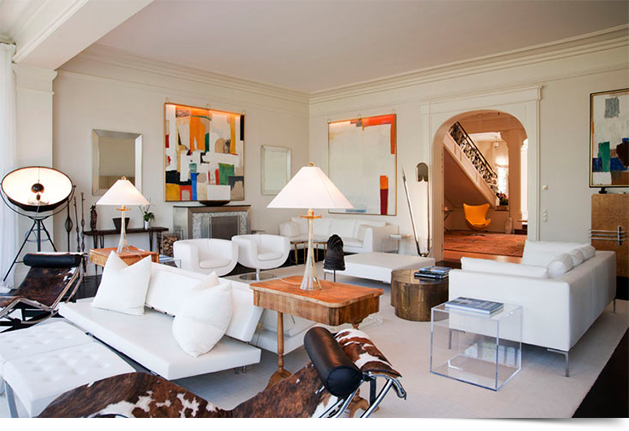 A trio of abstract paintings provides the primary color for a modern living room interior in Salzburg, Austria. Photo courtesy of Barbel Miebach.

Trained in design and architecture at the renowned and rigorous École Camondo in Paris, he soon after moved to Manhattan in 1981, a city that had captivated him during his few trips there as a teenager.

A self-described perfectionist, Couturier worked as a designer for Adam Tihany in New York (who designed the interiors for Le Cirque) before venturing out on his own in 1986. A chance meeting at a dinner party resulted in the ultimate game changer when he met billionaire financier Sir James "Jimmy" Goldsmith who asked him to look at his townhouse on Manhattan's Upper East Side. 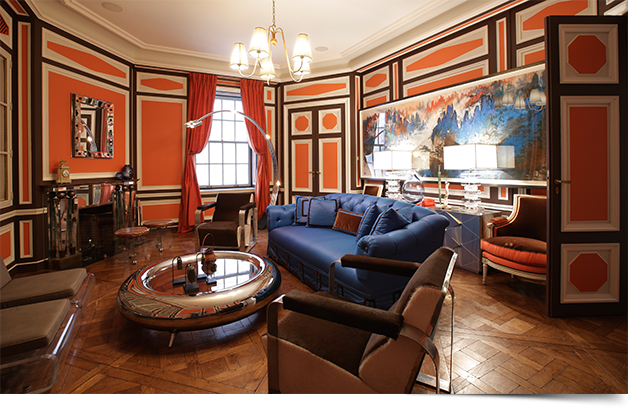 "I think life is like that — you arrive at these crossroads and whatever you choose, it's going to change your life in many ways," opines Couturier. "I walked through the house, which hadn't been touched since nineteen twenty-four, and offered a fresh new vision for what it could become, and was promptly hired."

Couturier worked exclusively on Goldsmith's projects for the next five years, designing his Boeing 757, historic French chateau and the pièce de résistance, a 60,000-square-foot palace known as La Loma on Mexico's Costa Alegre. Recognized as one of the greatest private commissions of the century, the ultimate dream job placed him permanently on the international design map. 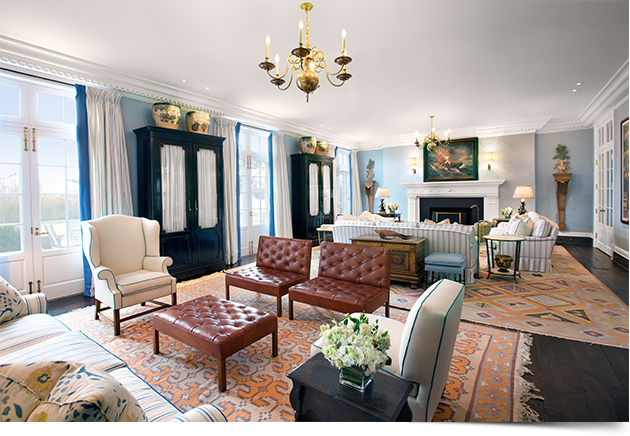 The casual traditional furnishings are a mixture of antiques and custom-design in the Southampton beach house. Photo courtesy of Francis Smith.

Couturier currently resides in Manhattan and Kent, Connecticut with husband Jeffrey Morgan and their adorable Shih Tzus. His work is a balance of the old and new; he's a master at mixing a variety of styles and elements, but is at his best when combining Old World elegance with a contemporary and continental international aesthetic.

"I hope my style will keep evolving until I die—nothing is more stultifying than a style immobilized in time," he says. "The work that we do MUST evolve and follow the times." Never trapped in one particular mode, his witty, sophisticated and often experimental interiors begin with the client.

"I try to understand the client. I am only a sieve through which the clients get their homes according to what they want. I never limit myself to anything; I use elements of every single period and from all over the world. There is nothing I abhor a fortiori, there are only things I don't yet understand." 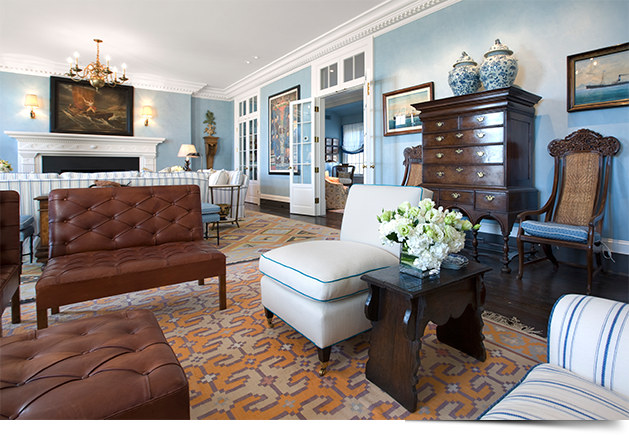 Looking to tones of the ocean and sky, a 19th-century Colonial Revival estate in Southampton receives a soft blue an white color palette. Photo by Francis Smith.

Never one to take himself or his work too seriously, Couturier observes in his book Designing Paradises (Rizzoli, 2014), "In the end, I have to admit that I'm completely addicted to luxury. I have no ability for anything else," with the exception of his other favorite guilty pleasure, Bravo's The Real Housewives of Atlanta.